Because one day they grow into teenagers.

Last week, one of said teen idiots looked at a crater-sized hole in my front lawn [that the Water Company dug for no apparent reason in January?!] – and thought stupid thoughts.

“Hey, my neighbor is at work. This is the opportune to time to hoist my idiot body through the air – over the Grand Canyon-sized hole – for fun.”

Of course, he fell in.

Because that’s where stupid thoughts lead.

Well those idyllic days of innocence are gone!

This is what his 22-year-old sister said as she re-told the jumping-the-crater story, “He’s an idiot.”

Thank you for sharing such deep thoughts. [Now, go away.]

There is only one important issue on the table. The safety of children.

Big and small. Smart and stupid.

As a uterus-bearer I have a responsibility to make sure they – the children, the future  of the world – are safe, even if I wasn’t on enough crack cocaine to think that I would want to push any rugrats out of my waif-like, dainty, semi-virginal vagina.

And by that I mean –

If that little turd starts falling into holes and breaking his bones.

WHO THE HELL IS GOING TO MOW MY LAWN?!

You know those homeowners who get up at ungodly hours to tend to their grass.

I don’t want to be one of them! 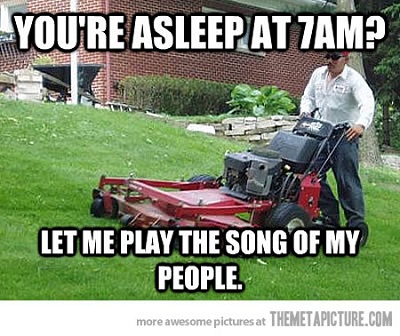 Sure. I could hire someone.

But then I would have to check their van [the obligatory vehicle of kidnappers and serial killers] for dead bodies – and well, people get offended when I do that.

Honestly, hiring contractors/people-to-do-stuff-on-my-property is like passing a kidney stone. I’d much rather pay the little capitalist next door.

But that means the jumping jackwad has to remain in fully-functional lawn mowing condition [ie, not dead].

Just for the record, here is a PSA [public service announcement] for any other other jumping jackwad.

An open hole is not an invitation.

You have to frakking Walk On By, m’kay?

So now I was on a mission.

I progressed from calling the Water Company bi-weekly about  the stupid crater to twice a day.

[Yes, I am talking about The Water Company – again. Much like I tell my lovers just before coitus, if I have to be bored to tears – so do you. Anyway…]

I am pretty sure the government spends all of my tax dollars:

This is the only way to explain why I keep getting the same not-so-delightful ingénue, Doesn’tGiveAShit, on the phone.

Our comedy routine is as follows…

“There is a hole in my lawn [douchebag],” I say in a surprisingly calm voice, ” Can I speak to your supervisor [who also doesn’t give a shit]?”

She sighs [because working at work is just so inconvenient].

Clearly, ignoring people can really take a lot out of a gal – because Doesn’tGiveAShit can barely muster the energy to make audible words, “So, what is your address again?”

I want to reach through the phone, fill her empty head with leftover jelly beans, and then bang it against the wall like a piñata.

Of course, she pretends to take a message for her “imaginary” supervisor- like I pretend to orgasm. 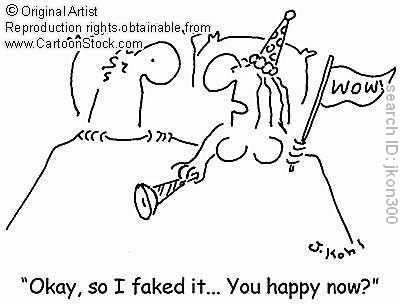 Ignore me? I think not.

People don’t like to be ignored. It just makes them talk more [and we all know how awful that is?]

He is an ex-boyfriend I dated many moons ago, after I ended my long distance relationship with my one-and-only love – a British guitar busker with a super-sized penis, Alex. I am not sure what I missed more when it was over?

a) the super-sized penis [ahh… so big, so completely sublime],

b) the guitar-playing [ahh… so sexy], or

c) the amazeballs cunniligus.  [ahh…so hard to come by.]

It’s like Sophie’s Choice. No really. I can’t pick. Life shouldn’t be this hard.

Anyway, Sean was so nice and simple. In a good way. Like a good hardy bowl of oatmeal. A welcomed retreat after a broken heart.

He was also very agreeable.

His answer was always the same, “Whatever you want is fine.”

But that didn’t stop us from engaging in many super short bouts of extremely timid sex.

Otherwise, what the hell am I doing in a relationship? Companionship? Ew. That’s what I have friends for…

One day, Sean brought over this ginormous box of condoms. [Seriously, dude? That’s optimistic.] On the scale of awesome gifts – a box of birth/STD control rates a negative 100.

Time to dump Mr. Agreeable. [I was bored. Okay?]

Which I tried to do nicely. Because he was so nice.

But he couldn’t accept that it was over. He called for weeks. Weeks.

So he called. And I ignored.

He called again. I ignored again.

Until, in one of the messages that he left – he said he just wanted one thing from me.

One thing? How intriguing. Ohhhhh, I love a good mystery. 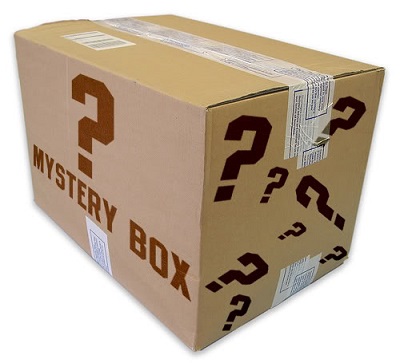 So when he called again. I picked up.

“I want my box of condoms back!” he screamed into the phone.

Admittedly, I  have a very high threshold for bizarre behavior [until I get bored, which takes about 2 nanoseconds.]

Find better things to do with my life.

Alas, there was no condom-exchange [because where would that exchange occur? Starbucks? I guess I am there all the time…]

And why do some people think that the end of every relationship comes with closure? [I mean sometimes you just don’t get your box of condoms back.]

Even worse, that other people have some secret knowledge that will heal all open wounds.

If reality TV has taught us anything, it’s that people are stupid.

Sometimes there are no answers. Or explicable conclusions. Sometimes shit sucks and that’s all.

You should bow down to the goddess of things fabulous, RuPaul – and be friggin’ pretend-happy [even though you know damn well you are still pissed off. Pretend already. It’s called acting].

If I want real answers, I ask a higher being, Google.

And if I want real comfort, I annoy people who actually give a shit about me, customer service at Amazon.com.

But none of those people work for the government.

And don’t be fooled because the hole is gone. Lots of good old-fashioned psychopathic behavior went into making those do-nothings do their job.

Yes, you heard me…

I just got home from work and the crater is gone.

Look at it. Perfectly filled with fresh dirt. Like it  never happened.

It is unusually warm for one of the first days of spring. You know those days where your gut is screaming it could snow at any second…

So don’t get used to it. But the sun is still out! And it’s after 6 PM. So orgasm if you are so-inclined.

It is that kind of day.

And it smells so good. So incredibly delicious. Like the spring air is candy. And I can’t eat enough.

I am glad to be home.

And then, I read the note the Water Company left…

But they needed to flush the pipes under my house.

So they turned off my water.

Apparently, when the government fixes something.

They need to break something else.