“Did you know there is a bug in your back window? Don’t you ever clean your car?” my nephew, Mikie, proclaimed from the back seat of my 2000 Toyota Corolla.

“I don’t know anything about the back seat. I never sit back there,” I said. [So take that, kid! ]

Question: Is there some reason people think cleaning the car is my responsibility?

There has been a shriveled up french fry under my car seat since 2006. It looks like a dead witch’s finger. But I leave it there because we’re friends.

That’s what happens when you invest time into a relationship.

“Ew…” my 6-year-old niece, Kayla, said – before she started screaming like she was being attacked by birds.

“Alright, people. Calm down,” I am totally about to get clever on these munchkins, “the rules are… whoever sits in the backseat cleans the backseat.” [There! I have totally outsmarted you with my adult-sized brain.]

“Okay. Can we go to a car wash then?!” Mikie exclaimed like he won the lottery.

“Yaaaaaay!” they both squealed with delight.

Time to change the topic.

“So what did you get your mom for her birthday?”

This story should take about an hour…

“Did you get her a present?” he quickly retaliates like a dog being cornered.

I don’t want to talk about my non-gifting philosophy with an 8-year-old. I’d rather rip out my fingernails.

So, again – because I am incredibly dense – I said something “clever.”

Thank you, RuPaul, goddess of all things graceful.

“That’s it. Love?,” Mikie said matter-of-factly, “that is like the worst give ever.”

If I weren’t driving with the full intention of living until I’m old, hot and fabulous – I would have curled up in a ball and laughed until I couldn’t anymore.

I love those moments. Unscripted. And brutally fun.

I want to put them in a magic bottle and save them for when I need them.

“So why haven’t you called me?” This is how he answered the phone.

[Look, you little fucker, I am on the phone with you. This is what “returning a phone call” looks and tastes like. Like chicken.]

I interrupted spraying whipped cream in my mouth for this?!

[Question: Did you know whipped cream comes in Peppermint flavor now? It’s an orgasm in a can.]

I am on Christmas vacation. It started December 14th.

It is my vacation away from people.

And for Peppermint-whipped-creamgasms. Damn you!

“I am calling you now,” I responded calmly. [See how all of my anger management is paying off, you creep?!]

Now, let’s watch in awe as I perform the super-complex trick of biting my tongue.

Because everyone knows biting your tongue is how you celebrate Christmas.

“But it’s been six months,” he shot back without a beat, conveniently omitting the fact that he hung up on me.

I’m not gonna lie. The hang up was a reprieve. That conversation was more excruciating than this one.

And I am not interested in chasing around people who hang up .

The only reason I am calling now is because he called twice in a row – and it’s almost friggin’ Christmas.

Twice means, “Help. I’m gonna die and I am too stupid to call the police. Right?”

So we either talk this shit out or you can take all of your nonsense and exit stage left.

I remember this phase. My asshole phase.

I just moved out of my abusive mother’s house and I was filled with rage.

And everything that came out of my mouth – though well-intentioned – was quickly translated into something combative.

But I knew everything at 17.

And I placed a premium on honesty.

Because I grew up pretending their weren’t monsters at night

Pretending my mommy was like every other mommy. And that she loved me.

I refused to live more lies.

So, yes. I was keeping it honest and real as a 17-year-old adult. 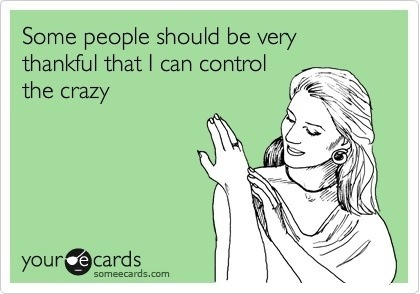 Without the riptide of anger drowning me and everyone around me.

But the Asshole Transformation Process is intricate. Hell, some people never even get past Step 1…

Step 1. Realize you are an asshole.

Step 3. Realize what it means not to be an ass. And then do that over and over again.

Step 4. Chill the frakk out.

This is the simplified process. And it takes years.

And I made it. My life is dope. Behold, the magic of it all!

But he is not there yet.

And there is a strong possibility that will not happen. He still and has always lived with my sociopath mother.

“You know, there is no need to be combative. This could just be a regular conversation,” I said scientifically.

There is either something wrong with his phone or he is as high as a kite. Because he talks painfully slow and I have to repeat everything I say.

And when I do, he only catches the last 5 words in his dimwitted net.

[Insert a pregnant pause – one of many – here.]

This is why I started replacing all of my relatives with better, more functional models when I was eight.

You know those reunions on talk shows where they reunite long-lost relatives. Everybody cries, including me. People hug. And you can hardly make it to commercial without a Xanax.

It’s more like this phone call with my brother who called me out-of-the-blue earlier this year – after more than a decade. [Damn that unbelievably intrusive internet.]

Now, I am forced to use my people skills – the ones I use with people who are pissing me off AT WORK [and so close to Christmas. And you know that ain’t right?!]

I can’t believe I gave up my Peppermint-whipped-creamgasm for this!

Never let it be said I don’t care about my fellow  man.

This is why he is pissed. Months ago, on our first phone call, he demanded he come over my house. I said let’s meet in a public place. And he hung up.

So I tried to explain, even though I don’t have to [and I want off this phone call – like pronto!]

That I don’t feel comfortable letting a strange man [who is clearly acting weird] into my house.

Surely, he understands my perspective as a single woman [even though he is either dumb or high, I can’t figure it out].

I thought it would be better to meet in an neutral area .

But he keeps repeating “But I’m your brother…” like a broken windup toy.

So I say, “I guess you don’t care to understand my position .”

After my entire paragraph of what I think is elegant, rational prose, he screams, “I understand. I’m 29!”

I realize this conversation is over .

Where ever he is going.

I am not going with him.

Nor do I want to.

He is no longer the baby brother I rocked to sleep at night.

So innocent, so quiet.

I wish I had put that memory in a magic bottle

And saved it for when I needed it.

171 thoughts on “The Magic Bottle”