“So, what’s going on?” my neighbor said to my 8-year-old nephew as we walked up my driveway.

[Look, Lady. Stop talking to the kid. I never know what the hell he’s going to say.]

Here is the situation:

I can’t screw up this relationship or I’ll be dead or frozen by next spring.

“We are coming over your house to see the puppy!,” Mikie announced excitedly. [Um… no, you’re not. You weren’t invited. Stop talking.]

At first, I really didn’t want anything to do with my neighbors. [Leave me alone. I am trying to be invisible.]

But they broke me in with all of the friendly, neighborly shit.

It’s hard not to love someone who picks up dead things for you.

“I have a question for you,” Mikie annouced to Sally, my neighbor. [Dear God, please make this question not humiliating. Amen.]

[Great. Now, would be a good time to stop talking.]

“So why do you have so many cars?,” he finally said. “You have A LOT of cars.” He dragged out the words “a lot” longer than a Jerry Lewis telethon.

In all fairness, my neighbors have 5 of the biggest trucks I’ve ever seen. It’s like living in a Ford dealership parking lot.

Now, my neighbors think I talk about their stupid cars. People always think a child’s itty bitty brain can’t come up with this intrusive shit. They must be repeating something they heard.

[First, yes they can. It’s their only job. Second, please keep picking up the dead things. Third, shoot me.]

Sally took over the conversation like a ninja who’s raised 3 kids. [Yes, Sally, he is adorable. It’s all downhill from here. Once they know that you know they are adorable, kids literally start barfing up embarrassing shit.]

She smiled, “I guess it is a lot of cars, but don’t worry we’re not buying any more.”

[Great. Let’s go. See ya. Bye. Adios. I was trying to get this kid to move behind any door that was closed.]

“Do you have any more questions?” Sally seemed entertained by my obvious discomfort.

[Noooooooooooooo! What in the name of RuPaul’s Drag Race All Stars winner, Chad Michaels, and all things holy are you friggin’ doing to me?! Stop talking.]

“Well, if you think of them later I am right next door,” she said so sweetly. [Later?! After he’s had time to think?! Not gonna happen.]

Honestly, I was just tired. So friggin’ tired.

This summer, I babysat my niece and nephew for 4 days – while their parents went to Vegas for their anniversary.

These were the Longest Four Days of My Life. Worse than grad school. Worse than working with my old boss that was Satan in heels.

After I did the puppy test, ie, do I really want a puppy?

I did the kid test for 2 reasons:

a) just to make sure I don’t want one and

b) I still have time to toss my one remaining crispy, dried up, egg in the freezer before it evaporates, if necessary.

Here is what my research from the “kid test” found.

Top 6 Reasons Not to Have Kids

6) Getting In the Car Takes a Fucking Hour 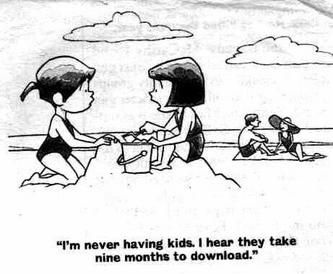 After the kids retrieve everything they’ve forgotten, they proceed to beat the shit out of each other getting into and out of the car.

He said this? She did that?

And then, someone spontaneously starts crying like a bee just stung them in the eye. It’s delightful.

Because every activity is like entering the Bermuda Triangle. And sometimes you don’t even make it to your destination.

5) You Will Never Pee Alone

In fact, you are never alone again. Ever.

I already had this problem with my cats. As soon as I sit on the toilet, my cats think I’m a chaise lounge and they proceed to jump on my lap, recline in the sun and order a martini.

When the kids hear one drop of pee, they start knocking on the door and become question assault rifles…

Why is the door closed? [Because I’m trying drown myself, honey.]

What are you doing? [Remembering how sweet freedom is.]

What are the cats doing? [The cats hate you. Hell, they hate me. Leave them out of this.]

What is a door? What is a knob? [Life, living sucks, sweet pea.]

4) Your House Will Be a Shithole Until You Die

They try really, really hard with the teeny tiny elf hands to pour things into – let’s say a bowl.

But the elf hands are defective and have no sense of depth or precision. So Goldfish crackers flew through the air instead of into the bowl. As well as cereal. As well as all liquid.

I have literally never used the mop-stick thingie so much in the 6 years I have lived in this house.

The other choice was not to allow them to eat. But that seemed inhumane.

I guess I could have taken over the exciting job of “pouring things into cups and bowls.” But there was one little problem…

3) Doing Everything Else, All The Time

There are no breaks.

Breaks are for people with nannies.

I spent the days picking up random shit that might impale their accident-prone feet, planning things to do, making sure there was food, answering questions, making sure they don’t get kidnapped or hit their heads and die.

And god forbid anybody was injured [which I worried about all the time.]

We would never make it to the hospital.

Because it takes an hour to get into the fucking car?!

2) I Was Tired All The Time

Because they never were.

They could literally play for 15 hours straight, run a marathon, go to bed at midnight and wake up at 6 AM.

Now, I understand why all of my friends with kids dismissed my single-girl problems.

Because they literally haven’t slept since Ronald Reagan was the President.

I am bitchy when I don’t get sleep. That was the problem with the damn puppy.

And my own time.

And to pee alone [well, kinda.]

And if peeing alone makes selfish.

My biggest single-girl problem this summer was:

I am still undecided. And I returned the one I bought. Because that’s what I do. I return 50% of the things I buy, which leads to my last point…

That means if you get a clunker. Like one of those kids who torture you for 18 years and then blame you for fucking up their lives – you are stuck.

You can’t return them!

Some of the fuckers never leave. My cousin’s son graduated from high school 7 years ago. Seven?! And he’s still  “finding himself.”

He has found himself on the couch. In his bed. On the  phone. Watching TV. And complaining about how hard his life was/is?!

He has looked everywhere but up his ass – where this mooching, conniving mothertrucker lives daily.

At least, my niece and nephew are adorable so that helped me .

One day, my niece walked up to me. She took my head in her grubby little hands. [Kids are always dirty. I don’t know why. They just are.]

She started looking at my hair. I mean staring like there was candy in it.

Just for the record, if a kid looks at you that long, it usually means you will need therapy when they are done with you.

“You have a lot of gray hair,” she said scientifically.

[Exaggerate much kid? A few. I have a few [like 10] gray baby hairs. That is my story and I am sticking to it.]

“They are so much prettier than the regular ones,” the sweet, adorable elf said, “They are so sparkly like glitter.”

[Oh, geez. This is how people get sucked in. Not me. Other people. But still…]